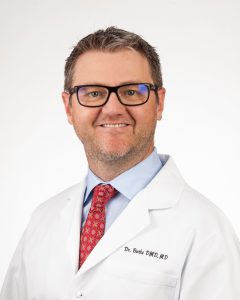 Dr. Burke was born in Pocatello, Idaho. He is a Gulf War veteran, who served in the US Navy aboard the USS Long Beach, CGN-9. After his military service, he attended Idaho State University where he graduated with his Bachelor’s Degree. His Doctorate of Dental Medicine was awarded in 2005 at the University of Connecticut. Dr. Burke then received his Medical Degree and General Surgery certificate from the University of Texas Health Science Center, San Antonio.

In October 2016 Dr. Burke became the first Oral and Maxillofacial Surgeon in this region to be recognized as a Fellow in the American College of Surgeons.