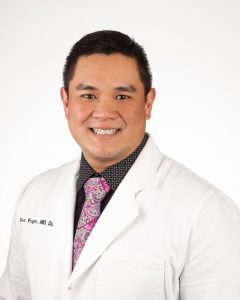 Dr. Pugao was born in Manila, Philippines but grew up in the quiet town of Andrews, TX. He attended Southwestern Adventist University and received his Bachelor of Science for Medical Technology. After working a few years as a medical technologist, Dr. Pugao earned his Doctor of Dental Surgery from Loma Linda University in 2007. In 2010, he received his Doctor of Medicine from Louisiana State University Health Sciences Center, School of Medicine—New Orleans. From there, he completed his post-graduate training in oral and maxillofacial surgery at LSU which included a general surgery internship certificate.

He is currently working on publishing research studies with his mentors, Dr. Daniel Spagnoli and Dr. Jon Perenack.